A common question that freelancers and consultants often ask is whether a proposal that a client accepts serves as a contract, or do they need to include a contract in addition to their proposal.

The uncertainty probably results from the fact that most proposal software companies include separate contract templates in addition to their proposal templates. That assumes that a contract is needed in addition to a proposal.

Do you need a contract in addition to a proposal?

To answer this question let’s first understand exactly what a contract is.

A contract must contain four elements to be enforceable:

1. Offer – One of the parties made a promise to do or refrain from doing some specified action in the future.

2. Consideration – Something of value was promised in exchange for the specified action or non-action. This can take the form of a significant expenditure of money or effort, a promise to perform some service, an agreement not to do something, or reliance on the promise. Consideration is the value that induces the parties to enter into the contract.

3. Acceptance – The offer was accepted unambiguously. Acceptance may be expressed through words, deeds or performance as called for in the contract. Generally, the acceptance must mirror the terms of the offer. If not, the acceptance is viewed as a rejection and counteroffer.

4. Mutuality – The contracting parties had “a meeting of the minds” regarding the agreement. This means the parties understood and agreed to the basic substance and terms of the contract.

“To be enforceable, the offers and acceptances must be in writing (Statute of Frauds, Common Law)and signed by the parties agreeing to the contract.” — Wikipedia

A proposal is a statement of the work or tasks you are offering to perform, how long it will take and the price you are charging.

Your consulting proposal can be presented and accepted verbally, by email, text, video … even by carrier pigeon.

By accepting your proposal, in whatever form you’ve agreed upon, the client enters into a binding contract with you.

While it’s common for contracts to be entered into by both parties signing them, the truth is that the client can also enter into a contract by clicking a checkbox (like software users usually do) or by simply paying you a deposit [the legal term for that is consideration].

For example, if you give your client a proposal that calls for a deposit of $2,000 for you to start work, and your client hands you a check for $2,000 — she has accepted your proposal and entered into a legal contract with you.

Now that we’ve defined both a proposal and a contract, let’s see if a proposal is good enough to serve as a contract.

Again, let’s review the 4 elements of a contract:

1. Offer – One of the parties made a promise to do or refrain from doing some specified action in the future.

By stating the work you will perform, how long it will take and your price, you have made the client an offer. CHECK.

2. Consideration – Something of value was promised in exchange for the specified action or non-action.

You promise to provide the client a service and the client promises to pay your fee. Notice that all you need the “promise” of payment. So actually getting a deposit from the client is consideration par excellence. CHECK.

3. Acceptance – The offer was accepted unambiguously. Acceptance may be expressed through words, deeds or performance as called for in the contract.

Getting the client’s signature on your proposal is certainly an unambiguous way of proving client acceptance. But the client can also accept your proposal by saying so in an email, text, video — or verbally (but that’s hard to prove later on). CHECK.

4. Mutuality – The contracting parties had “a meeting of the minds” regarding the agreement. This means the parties understood and agreed to the basic substance and terms of the contract.

Proposal is a Contract

Based on what we’ve just said, your proposal can most definitely serve as your contract, as long as it clearly states your offer and is just as clearly accepted by your client — either in writing, verbally, via signature or payment.

If you have specific terms you want in your agreement, you can include those directly in your proposal.

And you can include a signature area at the bottom of your proposal, preceded by a line saying that by signing the proposal the client is agreeing to the terms within.

Here’s how that looks on a proposal created using Propfire: 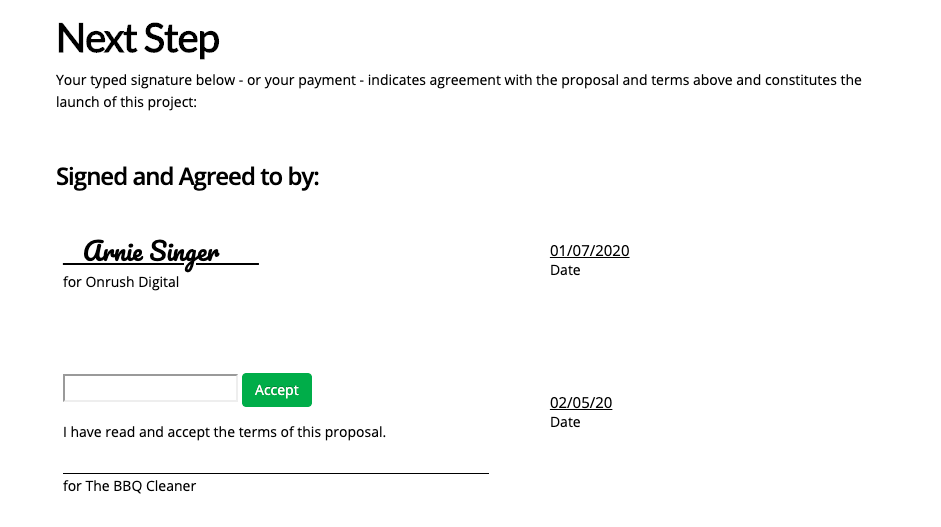 As you can see, by typing his name in the box and clicking on “accept”, the client is clearly indicating his acceptance of the proposal, including the price.

In general, when it comes to online signatures or acceptance, there has been a lot of different opinions.

According to an article by the Electronic Frontier Foundation,

“courts favor finding a binding agreement where the user engages in affirmative conduct acknowledging the terms of a TOS. For instance, a genuine clickwrap agreement, in which a service provider places a TOS just adjacent to or below a click-button (or check-box), has been held to be sufficient to indicate the user agreed to the listed terms. In these cases, requiring the user to click “I Agree,” after calling attention to the terms and affording the user an opportunity to review them, demonstrates the user agreed to the terms. However, courts generally do not require that you actually have read the terms, but just that you had reasonable notice and an opportunity to read them.”

In short, clicking that little box that says, “I accept the terms of service” is totally legally binding.

According to an article on the legal website Nolo.com:

Federal legislation enacted in 2000, known as the Electronic Signatures in Global and National Commerce Act (ESIGN), made most e-contracts and e-signatures just as legal and enforceable as traditional paper-and-ink contracts and signatures.

All states have adopted either the Uniform Electronic Transactions Act (UETA) or their own e-signature laws that establish the legal validity of electronic signatures and contracts in a similar manner as the federal law (ESIGN). The combination of federal and state laws ensures that most e-contracts and e-signatures are valid regardless of where the parties live or execute the contract.

According to the same article, “An e-signature is a digital file or symbol—such as a scanned pen-and-ink signature or a typed name—that someone attaches to or places on a contract or file to show that person’s intent to sign the contract or file.”

In addition to an e-signature, there’s also something called a digital signature, which provides digital identification to authenticate the signer. The signature is then electronically bound to the document using encryption.

So, in theory, if you had to take a client to court and they disputed the validity of the signature on the proposal or contract, you would have a better chance at proving your case with a digital signature.

But let’s be real for a moment.

Have you ever taken a client to court?

Do you think you will ever be in a position where it will be worth taking a client to court and risking to negative publicity that goes along with that?

I didn’t think so.

So getting an e-signature on your proposal is going to be just fine for you.

Some of the proposal software on the market includes as a feature the ability to attach digital signatures, which some, like Propfire, allow an e-signature.

In 99.999% of cases, it doesn’t really matter which one you choose. They are both just as good.

Based on what we’ve said thus far, it’s clear that proposals that are accepted are just as valid as “contract”. In fact, they ARE contracts.

There’s no need to give the client a contract in addition to a proposal.

All you need to do is include a signature section at the end of your proposal.

Why Contracts are bad

On the other hand, including a contract in addition to your proposal could have major negative impact on your chances of winning a project.

The last thing you want is for the client to feel like he has to get his lawyers involved.

Alan Weiss, author of Million Dollar Consulting Proposals says, “You want to stay out of the other person’s legal department because it will slow down the process and may stop the sale all together.”

When you present a “contract” to a client, he will feel the need to have it reviewed by a lawyer. And once a lawyer gets a hold of a contract, you know he’ll be making changes to it. It’s what lawyers do.

For most freelancers and consultants, the less legalese in your proposal, the better.

It can also be very overwhelming for your average client to have to make it through both a proposal and then a contract.

Imaging that you’ve presented your proposal to the owner of a small manufacturing company, and he likes what you’ve said. He’s ready to pull the trigger and give you the business…but then he turns the page (or scrolls down) and sees the contract.

Of course it’s one of those contracts filled with the legal jargon and clauses that are supposed to be in contracts, and that only lawyers usually read.

So you potential client has a choice. He can either try to read through your contract, which he does not have the time or patience to do (seriously, who does?), OR he can let his lawyer read it.

The only thing you know for sure is that he’s not hiring you do to the work NOW.

Maybe he will, after the lawyers get done with the contract. Or maybe he’ll want to change some of the terms (as lawyers often do).

In any case, you’re kicking yourself for including a contract instead of just a signature section at the bottom of your proposal.

Ditch the “official” contract and just use your proposal as your contract.

A signed proposal is just as legally valid as a signed contract. So there’s no need of presenting both a proposal and contract to your client. In fact, it can actually hurt your chances at winning the business by getting lawyers involved and slowing down the acceptance process, or destroying it altogether.

Want to join the discussion?
Feel free to contribute!

Download this free eBook to learn how to price your web design projects so that you make a lot more money. Full of strategies and tactics you can implement asap.
Written by Arnie Singer, founder at Propfire.

Get our free ebook filled with tactics you can use to price your projects higher and make more money!
We'll send it to your inbox.