There are lots of great software tools out there that make it really easy to curate content or create original posts and schedule them to be posted on multiple social media platforms via multiple profiles or accounts.

In other words, instead of taking time throughout the day to post or engage in multiple social media accounts, you can set up all of your posts on one day, and then let the tool take care of the rest.

It gets even better. Many tools allow you to schedule posts that are automatically generated based on the type of content you indicate that you’re interested in sharing. For example, you can use quu.co to curate content based on your interests and then create posts with copy that reads as if you actually wrote it yourself (or better).  You then integrate quu with buffer.com, which publishes the posts to your account. Once you set it up, it keeps on posting without you ever having to even think about it again.

I’ll admit, I’ve done the quu-buffer hack and sometimes I’ll actually see one of “my” posts and be pretty impressed. It’s really good!

I’ll also see posts by other people who I’m pretty sure are using the same hack (or something similar) and for a moment I’ll be super impressed at their diligence in curating content and posting — until I remember that it’s automated.

So if it looks good and works, is it bad?

The word “bad” is so final. It implies bad to the core or bad forever. Few things are truly bad. And the same is true of social media automated posting. It’s not all bad.

Before I get to the good part, let me spill some ink on the “not so good” stuff.

Social Media is supposed to be in real time.

Can you imagine if Facebook and Twitter were around on 9-11-2001, and you had scheduled a bunch of meaningless posts or stupid cartoons a couple of days before? You would feel pretty shitty when you realized what you had (automatically) posted on your account while the rest of the world was falling apart.

While that might be a drastic example, things are happening in real-time that should effect the type of content you want to be sharing or posting. When you schedule content way into the future you’re ignoring that fact and setting yourself up for a potential PR disaster or, at the very least, an embarrassing situation.

Sure, the odds are in your favor, but still. When an important news event breaks, do you want to be caught sharing a video about a cat taking a crap on someone’s head?

And then there’s engagement.

What happens when someone actually takes the time to interact with one of your automated posts, but you have no idea because you’ve set it and forgotten it? You’ve missed a golden opportunity to make a meaningful connection and take the conversation to the next level.

You might respond to my minor rant about the dangers of scheduling by saying that you constantly monitor your social media accounts so you’ll know immediately if there’s a problem.

My response: if you’re already monitoring the darn thing, then why not just publish your posts in real time? 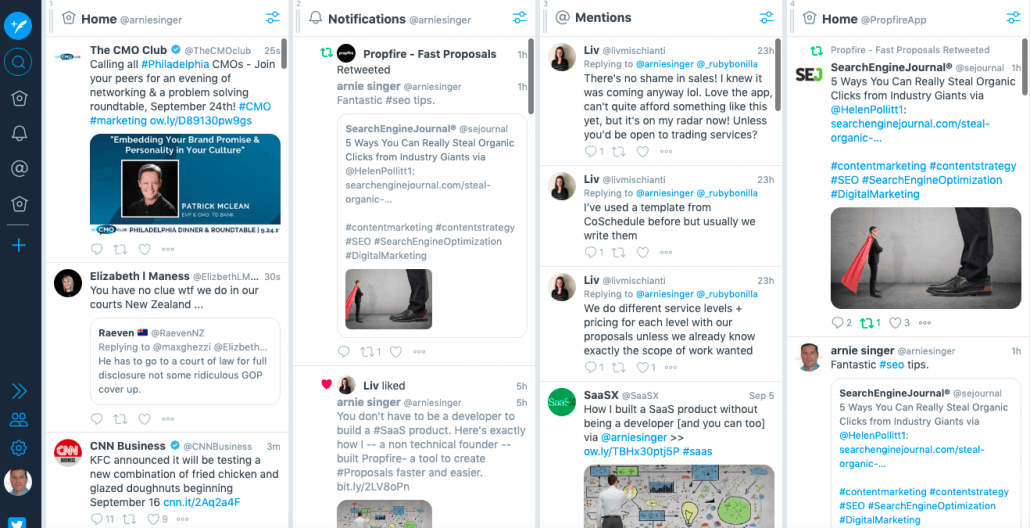 Look at your objective

Here are 3 possible objective and whether automated posting would be a pro or con:

If your goal is to build authority and become a thought leader, then blindly posting content that might or be not be totally relevant to your field is a bad idea. You don’t need to post a lot, but the content you do post should be of the highest quality and relevance to your target audience.

In order to get noticed in this overcrowded social media world you sometimes need to make some noise. By posting anything, you’re at least getting the slim chance of being seen, even if those seeing you aren’t going to click on your link or read your post. But they will see your face for a split second, remember that you exist and say, “hey, she really is active on social media”. And if you’re looking to do social media work for clients, then they might actually think of you when looking to hire.

If you’re looking for relevant users to engage with your content, then sharing links and generic copy is not the way to go. People want to engage with other people — real people.

The posts that tend to get the most engagement (other than photos of naked women or funny cats) are those that are clearly written by an intelligent (and often witty) human. And they are unique and “in the moment”. They often are reactions, rants or just acute observations. But they scream I’M REAL and ENGAGE ME!

So if you’re looking to make some noise, by all means do the automation hack and start spitting out content and adding to the clutter of social media muck congestion (and indigestion).

But if you’re looking to build a reputation as an expert in your field and to engage with your target audience in a meaningful way, then pass on the scheduling and post in real time.

Want to join the discussion?
Feel free to contribute!

Download this free eBook to learn how to price your web design projects so that you make a lot more money. Full of strategies and tactics you can implement asap.
Written by Arnie Singer, founder at Propfire.

Get our free ebook filled with tactics you can use to price your projects higher and make more money!
We'll send it to your inbox.